I got an offer for my business… What do I do now?

Here’s how it starts: a buyer approaches an owner and offers to buy their business. The owner, who has been thinking about selling, is interested, but doesn’t know if the offer is good enough to take. Meanwhile, the buyer starts to put pressure on the owner for an answer. What should the owner do now?

In considering whether to accept the offer, it’s helpful to consider the pros and the cons. 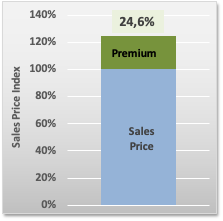 If the owner wants fair value for the business, negotiating with only one potential buyer is almost always the wrong path to take. The best way to get higher value for a company is to create a competitive bidding environment. Of course, as investment bankers, we have a vested interest in convincing business owners to conduct a competitive auction.

However, a business owner typically realizes transaction proceeds 10% to 100% higher in a competitive process vs. a single directed conversation, with the majority ranging from 15% to 40% higher.

An independent study[1] based on a sample of 3,281 transactions determined that the median improvement in value for a private company hiring an M&A adviser is 24.6%. So even though there is a cost to hiring an investment banker (2% to 8% of the transaction value) that cost is a fraction of the average increase in value when using an investment banker.

Because the buyer in a one-on-one negotiation knows there are no other bidders, that party has a lower incentive to compromise, even if a good relationship exists between the owner and the buyer. That is why buyers all want deals that no one else knows about. When private equity firms pitch investors, they commonly boast of this “proprietary deal flow,” because it implies a higher potential return on investment.

Even if the offer seems like a fair value at the start of the process, a solo buyer typically takes a harder stance on critical elements of the negotiation, such as how much of the purchase price will be in up-front cash, the terms of any earn-out, or how to treat working capital.

Communicating to the Buyer

Usually we convince the owner to create a competitive bidding process. What next? It’s critical to communicate diplomatically with the original bidder, who remains a very likely acquirer. The goal is for the owner to express appreciation for the unsolicited offer but indicate that they need further time to think it through and that they will reach back out to the buyer in the near term. There is no need at this time to indicate that they have initiated a competitive auction.

The buyer may accept this explanation patiently or they may pressure the owner to proceed now, imposing a time limit. Otherwise, they will go out and look for another target.

While not a sure thing, we usually find that if a buyer is interested now they will be interested in a few months. Furthermore, a threat – either veiled or open – is not a good omen for either the negotiation or the relationship after the deal closes.

The first step is to engage an investment banker. There are many capable and qualified boutique firms operating throughout the country.

There are three critical questions an owner should ask:

The investment banker will start off by estimating a market value, which may differ significantly from the original offer. Then the banker will position the company, identifying key investment rationale for financial buyers, such as private equity firms, and for strategic buyers, such as competitors already in the market or in adjacent markets.

One of the most important steps is identifying weaknesses. In the same way that a seller repairs a house before putting it on the market, the owner should address potential flaws prior to showing the company to potential buyers.

The investment banker will then prepare marketing materials for the company and identify a list of potential buyers, including the initial bidder. The owner then re-engages directly, explaining that, because of the obligation the owners owe to their families, employees, and other shareholders, they have hired an investment banker to run a competitive process and get the best value for the company. Once the dialog is restarted, the banker takes over and integrates the original buyer into the auction process with all of the other potential bidders.

Turning away a buyer who is ready to open its checkbook is difficult intellectually and emotionally. But sellers usually come out significantly ahead when they run a competitive process. By managing a well-run process, an investment banker generates a significantly higher value for business owners looking for an exit.

Mr. Rubin is a Managing Partner at the Westbury Group, a middle market investment bank located in Westport, Connecticut.

Over the course of his career, Mr. Rubin has worked as a strategy consultant for Fortune 100 companies, as an operating executive for firms ranging from startups to publicly traded companies, and as an investment banker for entrepreneurial middle market companies.